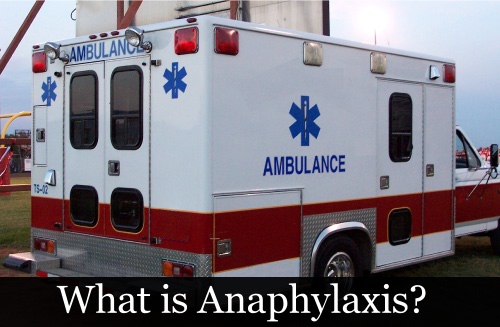 Anaphylaxis is a severe allergic reaction that is life threatening. Usually two systems of the body are involved such as the respiratory and circulatory system. An example of a reaction with these two systems would be difficulty breathing (respiratory) and drop in blood pressure (circulatory).

How do you pronounce anaphylaxis?

The syllable break down is; An a phy – lax is

Anaphylaxis occurs when a person comes in contact with an allergen through ingestion, bites, stings, and contact. There are two other forms of anaphylaxis, although both are rare. The first is exercise induced anaphylaxis which occurs during exercise and three to four hours after eating a specific food. The second occurs without a specific identifiable reason. All forms of anaphylaxis are life threatening.

What symptoms occur when experiencing anaphylaxis?

The symptoms that occur are variable. The most common symptoms are: itchiness in the mouth, on the tongue, and/or the back of the throat; swelling of throat; swelling of bronchial tubes; coughing; gastrointestinal shut down; vomiting; diarrhea; swelling of eyes, lips, tongue, and extremities; hives; and loss of consciousness. There may be additional symptoms depending on the persons overall health, amount of allergen ingested (reactions to stings and bites depend on how much poison enters the body), immune system function, and other factors.

What medication is used to stop anaphylaxis?

The medication used is called epinephrine, also known as adrenaline, and it is a vasoconstrictor. This medicine works by counter-acting swelling, dilating air ways, and contracting blood vessels. Anaphylaxis is a medical emergency. Call 911 immediately, even if treated with medication.

How is the medication administered?

Epinephrine is administered through an auto-injector or intramuscular shot. The auto-injector is an automatically released shot of epinephrine. The two most common manufacturers of this medication are EpiPen and Twinject.

Does anaphylaxis disappear after one shot of epinephrine?

Does the possibility of anaphylaxis go away?

Allergies can lessen in severity and become non-symptomatic through time. If this is the case then anaphylaxis may be less likely to occur. An allergist will be able to discuss this possibility with you since there are many factors to consider.

How can you tell whether anaphylaxis is going to happen?

It is impossible to be certain anaphylaxis is going to happen. However, if a person has experienced anaphylaxis in the past, even if it is from a different food or an environmental allergen, then it is safe to assume that anaphylaxis may happen.

How do you prevent anaphylaxis?

Avoidance of the allergen is the key to prevention. If a person is allergic to a food then it is recommended to avoid that food, even trace amounts. If the allergy is derived from the environment; for example pollen, insect stings, and chemicals; then it is important to stay away from that allergen. It is not safe to assume anaphylaxis will not occur so always be prepared for treatment by carrying medication with you at all times.